SIGMA slipper clutches have proven themselves to be a reliable and tough addition to many a racing teams armoury. On their very first outing in a Ducati back in 1998 they won a World Superbike support race at Donington and in 2004 at Brands Hatch won in their very first British Supersport race on Jay Vincent’s Padgett’s CBR 600. The Yamaha R1 2004 version also had a great year winning the Canadian superbike championship with Pascal Picotte.

This section of the website is dedicated to slipper clutches, how they work, how to adjust them, where they came from and how to order one for your own engine. 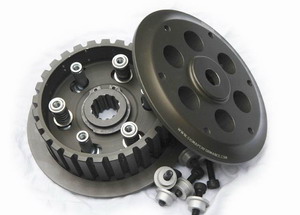 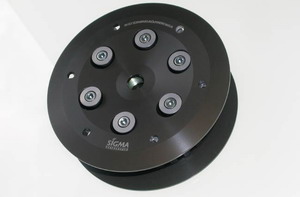 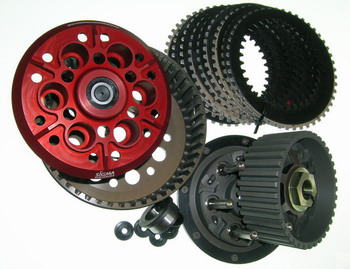 Of Racing and Reliability

Back in the mists of time (well, 1998) when we were cooking up our Ducati Supermono’s debut we were trying to find a way to both make the bike easy to ride quick and, especially as it was my pride and joy, keep it reliable and in one piece. We had decided to use 250 riders, these guys like to arrive at corners, mash the gearbox down three gears and power out of the curve, with their two strokes having no engine breaking and virtually immune to mechanical damage over revving this style is very effective.

A four-stroke single, even a desmo, is not going to appreciate such behaviour for long. The engine, valves and bearings are going to be hammered by the sudden over revving (the rev limiter doesn’t work when the rear wheel is turning over the engine!) and the rear wheel is going to try to lock up, the rear suspension is going to get bounced around too, destroying all pretence of maintaining grip.

Racing is about far more than power; as the MotoGP warriors are discovering right now, well controlled high corner entry speeds are just as important to a quick lap as sheer grunt.

We fitted a Slipper clutch; it gave us a real advantage, our riders could ride the bike exactly as they wanted, it let the bikes suspension work better coming into and through corners and also let the motor take the abuses of race track use without the constant threat of over revving. As a result we picked up victories at both Daytona and Donington, first time out.

A bit of history.

Listening to the wonderful drawn out chest pounding boom and roar of Read and Bonera on the two works MV Agusta’s going into the final two turns of the Assen GP track is my abiding memory of my first GP. Never mind that the race was a brilliant duel, between Sheene and Agostini, both two stroke mounted.

What I had not appreciated was that I was listening to the four-stroke 500GP endgame. In 1975, the once all-powerful MV Agusta GP squad was struggling. The main enemy was the big 500 two stroke, light and quick. The Japanese engineers were using their small bike knowledge to great effect. The two strokes had power aplenty as well as their unsung advantage, no engine braking; the two strokes were faster into the corners as well.

The MV Agusta’s we were watching were making beautiful emotive noises, like hollow rolling thunder; noises that came from the rear wheel turning over the engine; engine braking. The noise was fantastic but the effect was for the chain to jerk the rear suspension around, the bigger the pistons and the higher the compression; the worse the problem. It was bad enough to be a significant disadvantage with a 500 four like the MV; with the lumpy great 500cc pulses from a 996 Twin like a Ducati Desmo it is sheer poison, the same with big fours, as soon as there is any decent engine compression there is going to be a lot of engine braking interference with the rear suspension. Even worse, to try and control the pulsing the rear suspension damping is normally set very stiff so compromising the suspension’s ability to float over bumps elsewhere on the circuit.

Riding fast on a circuit, or for that matter on the road is all about smoothness, it is about loading up the tyres to their limit of grip (or controlled slide) and holding them there at that fine margin of grip; just before they really ‘let go’. All the suspension and chassis set up effort goes into helping this situation be predictable and accurate. What you do not want is the big pistons hung off the other end of the chain jerking the swing arm about, either while floating into a high speed corner or coming into a slow, hard braking corner. To go fast and maintain grip you need smooth progressive deceleration as you roll off the throttle and no jerks that would result in a movement in the swingarm.

In 1979 Honda debuted the NR500. this was their re-entry into racing after a 12 year hiatus. The bike was designed by the youngest and brightest of their engineers. It was a deliberate attempt to look for alternative solutions to existing designs. As a bike it want a success but its unique oval piston, twin con rod per piston, design had a lot of engine braking and one of the solutions developed was a ‘back torque limiter’, other wise known as a slipper clutch. Just three years later the FWS1000, the Water Buffalo, turned up at at Daytona. Their biggest pure motorcycle racing engine ever it was a four-stroke V four prototype designed purely to win Daytona. It failed because the trick new idea to eliminate rear heel hop wore out the clutch, an inauspicious start, but the anti hop ‘slipper’ clutch was born.

The same year these clutches were also used on Honda’s 750 Interceptor factory Super bikes. Rob Muzzy had several different versions to get his Kawasaki Super bikes into corners easily and at one time during his US racing period it’s said that Muzzy supplied a drawing of such a clutch to Yamaha to keep them in the game (This one is a little difficult to verify though). It became apparent that while a slipper clutch was handy on a four-cylinder 750 but it was absolutely crucial to have one on a big 1000. Development has continued and now no self-respecting four stroke race bike, be it super bike or MotoGP bike would attempt to race without something to stop the engine braking forces messing up the rear suspension and tyre grip. 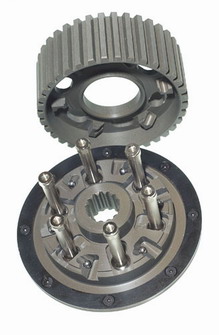 You can clearly see the six ramps and ball bearings

There are several types of slipper clutch but the Ducati version is one of the simplest. The original clutch put on ducati’s is a purely mechanical device, when the throttle is closed and the rear wheel starts to turn over the engine a simple system of 45 degree ramps (with or without ball bearings, depending on budget and manufacturer) inside the central drum forces the drum up against the outer pressure plate, so forcing the clutch plates apart. As soon as the clutch starts to slip the forces holding the clutch apart are controlled and the clutch is held in a perfect slipping situation, just enough power is transmitted to maintain the equilibrium. In a normal driving situation the clutch operates just like any other. 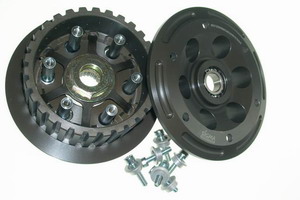 Yamaha R1 assembled, internals hidden
The point at which, the clutch releases, the way it does it makes a real difference to the way the engine braking affects handling and the suspension set-up required as a result.
It used to be that every racer developing a new race bike (especially the ex two stroke guys getting used to their new GP four strokes) needed time to get the initial set up right. Now however most of the dynamics are well understood and an initial adjustment is relatively easy to find.

What else can be tried?

There are clearly other things you can try. These are not ideas that have been universally accepted and which each carry other risks (that means, for all you lawyers, that I am not recommending them!!!!).

One alternative is to try and control the situation manually, just by hauling in the clutch lever each corner, and maintaining a constant RPM into the corner; a situation that rapidly wears out the rider and does not provide the accuracy and smoothness needed for rolling into really fast corners.

Another idea is to just increase the tick over, racing engines can regularly heard ticking over above 2000 rpm, this doesn’t exactly endear one to the neighbours and it can feel really weird (and dangerous) going into slow corners with the engine still pushing despite the throttle being fully closed. It does mean that high speed cornering is slightly easier and most importantly more fluid, nothing sudden in the engines behaviour to cause tyres already at the limits of their traction to break away.

So how does a Sigma slipper clutch work?

The following drawings (have another look at the pictures above for the detail of the internal ramps as well) show the basic idea; I would also suggest a nice cold towel for the head at this point.

When the engine power is driving the bike forwards in the normal direction the little ramps lock solid; the clutch acts completely normally. Diagram A shows the normal situation. 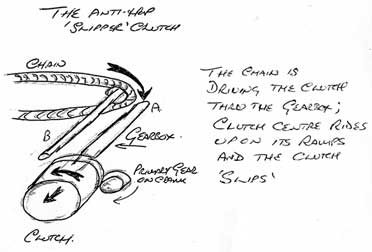 As soon as the clutch pack stops gripping (i.e. when the centre has risen slightly on its ramps) most of the force to hold the pack apart is lost and theoretically clutch grip is re-established as the pack tries to come back together. In practice the clutch establishes an equilibrium position where there is just enough force being transmitted to hold the clutch apart (i.e. to hold the centre partially up the ramps) yet just enough to stop the engine being revved up, this equilibrium point can be adjusted either by varying the spring rate or the effective pre load on the springs holding the clutch together or by varying the height of the assembled clutch pack. This is why you will often see theoretically rich well-funded race teams sorting through endless piles of seemingly knackered clutch plates trying to get precise pack thickness’s they want to give their rider the feel he is used to.